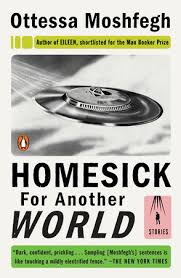 I’m reading Ottessa Moshfegh’s collection of short stories “Homesick for Another World.” While I had some trouble settling into the stories in the beginning, I’m glad I stumbled across the book at my library. I love it when women write dark, troubled, non-sexy characters–and this book? Yeah. It fits that build.

“Homesick” is not a rewarding read in the traditional sense where a story is finished and the reader feels a sense of accomplishment, of closure. Nope. If anything Moshfegh’s strength is leaving you more unsettled, more worried than before. She really is a great writer–even if she is a tough writer to love because her characters are so tough to love.

(Incidentally, I happen to agree with Roxane Gay’s review of this book on Goodreads–the way fat characters are described gets to be too much. Sadistic. Phobic. I also thought the story “Mr. Wu” was problematic.)

I came across this passage, however, in the story “The Surrogate.” And it stopped me as all good passages that touch on our lives in intimate ways do.

“Gigi said, ‘Don’t worry about finding a husband. When the woman is the hunter, she can only see the weak men. All strong men disappear. So you don’t need to hunt, Stephanie Reilly. You can live on a higher level. Just float around and you will find someone. That is how I found Lao Ting. It was as if there were a spotlight on him and he walked on air about two feet off the ground. I saw him from a mile away.'”

Well, I’m here to say, no, Stephanie Reilly, that is terrible advice, as my current single life can attest.

I’m pretty sure I have been floating around for a long time now. Hoping things just somehow work out.

Which is why when a friend of mine suggested that I start dating like a *man in 2019, I thought, yeah, this is good advice. I need to hunt. I need to seek what I want. We all do. Because floating ain’t getting me anything but dark clouds.

It’s not that I don’t know that feeling of meeting someone that Gigi describes. That slow-frame pause on a moment. I can still remember the feel of my first love’s handshake when we met. The way he held on, the papery warmth of his palm, his strength, his closeness, his scent. Everything stopped. Everything focused in on him. He didn’t want to let go of me, he told me later.

But first loves are first loves. Most pass. And believe me when I say this: Thank God for that. There have been other moments since then. But none for a long time.

*I recognize the stereotype, but if you’ve spent ANY time with online dating, then you will see the stereotype still mostly rings true. Men do a lot of messaging to usually younger women.

View all posts by Lynn Wohlwend